Book Review - A Dance in Donegal by Jennifer Deibel 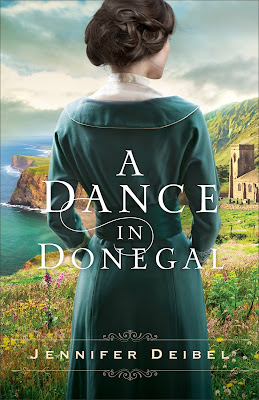 A Dance in Donegal is a historical novel set in 1920. Moira Doherty leaves Boston after her mother dies to return to her mother's hometown of Donegal, Ireland as a schoolteacher. Upon arriving in Donegal she hears rumors of her mother's scandalous past, deals with small town small mindedness, and finds love.

I wanted to read A Dance in Donegal because both the Irish setting and 1920 time period were intriguing.

The author has lived in Ireland and she did an amazing job at setting the scene and capturing Ireland of many years ago. The characters use Gaelic terms and there is a glossary of terms at the end of the book to help readers. I really enjoyed the old Ireland details in this book and the lovely historical details.

Moira is a very sympathetic protagonist who has faced great loss and taken a real chance to move to another country - only to find obstacles from the small minded town folk. She faces barriers based on her mother's reputation, and when she tries to help a student who has Spanish Influenza, that further separates her from the town.

Moira has two men who are interested in her - Sean, a village thatcher who is strong and kind, and Declan, a barrister recently returned to the village, who is charming and glib.

This is a Christian novel. I read inspirational fiction regularly and enjoy it. I found the message in this book to be much more direct than I am used to and I often wished that there was more "show, don't tell," with the character's faith being shown more subtly through actions and quiet strength.

A Dance in Donegal is a novel for fans of Christian fiction, and especially for anyone who is interested in Ireland.

All her life, Boston-born Moira Doherty has relished her mother's descriptions of the Emerald Isle. When her mother dies unexpectedly in the summer of 1920, Moira is compelled to fulfill her dying wish--that she become the teacher in Ballymann, the beloved village in Donegal, Ireland, she's heard so much about.

After an arduous voyage, Moira begins a challenging new job in an unfamiliar and ancient country. Though a few locals offer a warm welcome, others are distanced by superstition and suspicion. Rumors about Moira's mother are unspoken in her presence but threaten to derail everything she's journeyed to Ballymann to do. Moira must rely on the kindness of a handful of friends--and the strength of Sean, an unsettlingly handsome thatcher who keeps popping up unannounced--as she seeks to navigate a life she'd never dreamed of . . . but perhaps was meant to live.

Jennifer Deibel is a middle school teacher whose work has appeared on (in)courage, on The Better Mom, in Missions Mosaic magazine, and other publications. With firsthand immersive experience abroad, Jennifer writes stories that help redefine home through the lens of culture, history, and family. After nearly a decade of living in Ireland and Austria, she now lives in Arizona with her husband and their three children. You can find her online at www.jenniferdeibel.com.