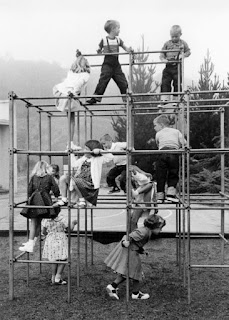 When I was a kid, we had jungle gyms.  They were on the playground at school, at public parks, at campgrounds ... and I never met a jungle gym I didn't like.  You see that little girl climbing on the top of the jungle gym below?  That is exactly what I would have done on this climber.  You rarely see these now, with playground safety concerns, but they sure were fun!   Do you remember retro jungle gyms?  Were you a playground daredevil who hung upside down on jungle gyms and stood up on swings?   I'd love to hear from you in the comments, below. 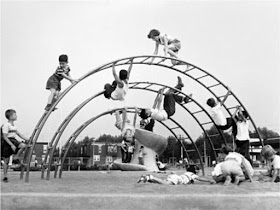 Book Review and Giveaway: Axel & Theo: My Dog is The Emperor of a Faraway Galaxy

Mother Daughter Book Reviews is pleased to be coordinating a Blog Tour for the lower middle grade book "Axel & Theo: My Dog is The Emperor of a Faraway Galaxy" by Amberly Kristen Clowe from June 22 to 28, 2015. This one is a great choice for reluctant readers!

Summary: Theodore Howard wants a white flag. The kind of white flag that will show Riverwood Elementary’s biggest bully, Theo’s given up on ever surviving the fourth grade, and achieving his dream of becoming a real-life astronaut. But, Theo’s seemingly pathetic future gets a glimmer of hope in the form of a very talkative weenie dog named Axel. Theo learns that his best friend on four legs, is actually an alien from the planet Doglin, and just when he begins warming up to the idea of having an alien for a best friend, Axel is kidnapped by two cats from the planet Catlat. Theo chases after Axel and his kidnappers, embarking on an adventure he could have never imagined.

Readers of my blog will know that I am slightly dachshund-obsessed.  From the moment I saw the cover of Axel & Theo: My Dog is The Emperor of a Faraway Galaxy, I wanted to read this book.  The cover art even features a little boy and his red smooth dachshund buddy.

This is a charming read for children.  It will appeal to early readers as well as reluctant readers a bit older.  I think the reading range of 6 - 10 years is spot on.

Young readers will love the story of Theo, who escapes a bully with the help of his brave dachshund ... and then ventures to outer space on a great adventure with him.  Axel, the brave dachshund, is the emperor of planet Doglin.  Unfortunately, Doglin is being threatened by cats who want to rise to power.   How the boy and dachshund escape danger and emerge victorious is a fun read.

The book is very clever, with short chapters and dialogue that moves the story along.  Descriptions are creative and sure to appeal to a child.  For instance, on planet Doglin flowers smell like rib-eye steaks so they appeal to dogs, and the ocean is full of strawberry soda.

I would enthusiastically recommend this book to children who love fantasy adventure stories, and to adults who love dogs.  Five stars from me - and four paws up from my doggie friend Abby!

More Buzz About the Book

"When I saw the subheading of this book — My dog is the Emperor of a faraway galaxy, I knew I had to read it. After all, how often do you see a sci-fi kid’s book? Being the sci-fi nut that I am, I couldn't pass this one up. I was not disappointed."~ Shari T., Amazon

"Fun book!! The story is imaginative but told with enough familiar themes to make young ones think, "I can see how this could happen!!" And in a world jam-packed with princesses and girl power, it's nice to see fun stuff for boys, too." ~ Valerie S., Amazon
"What a nice story! Got this for my son and he chuckled through it all. He loved the characters and their adventure. He is looking forward to the next one." ~ Nathalia G., Amazon
"It is a great book! My kids loved it (as did I). I can't wait for the second adventure!" ~ John, Amazon

About the Author: Amberly Kristen Clowe

An avid story writer since elementary school, Amberly Kristen (Krissy) Clowe truly discovered her passion for writing after enrolling in a college, children's literature class, where they read and analyzed children's books. After completing her BA in early childhood education she began her teaching career. "After my first year of teaching second grade, I had so many ideas swirling around in my head, I had to write. I might have gone crazy if I didn't!" Clowe tells. Axel & Theo is the first chapter book series written by Clowe, though she already has two other children's picture books in print, and another due for publication in 2015. Today, her children provide the inspiration to her many stories, along with everything else she loves in life.

Prize: One winner will receive a $25 Amazon gift card or $25 PayPal cash prize, winner's choice Giveaway ends: July 5, 11:59 pm, 2015 Open to: Internationally How to enter: Please enter using the Rafflecopter widget below. Terms and Conditions: NO PURCHASE NECESSARY TO ENTER OR WIN. VOID WHERE PROHIBITED BY LAW. A winner will be randomly drawn through the Rafflecopter widget and will be contacted by email within 48 hours after the giveaway ends. The winner will then have 72 hours to respond. If the winner does not respond within 72 hours, a new draw will take place for a new winner. Odds of winning will vary depending on the number of eligible entries received. This contest is in no way sponsored, endorsed or administered by, or associated with Facebook. This giveaway is sponsored by the publisher, SmoothSailing Press and is hosted and managed by Renee from Mother Daughter Book Reviews. If you have any additional questions – feel free to send and email to Renee(at)MotherDaughterBookReviews(dot)com.
a Rafflecopter giveaway

I received this book from Mother Daughter Book Reviews in exchange for an honest review.
Birdhouse Books at 6:00 AM 1 comment:
Share
‹
›
Home
View web version