Book Review and Giveaway - The Limits of Limelight by Margaret Porter 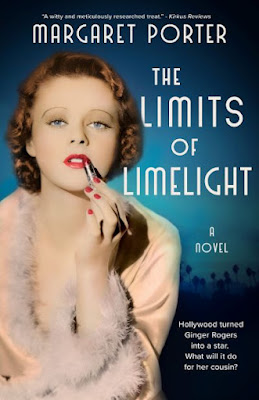 The Limits of Limelight is a story of old time Hollywood. Pretty young Oklahoma teenager Helen Nichols visits her aunt and her cousin, Ginger Rogers, in Hollywood. She soon finds herself renamed Phyllis Fraser and pursuing a movie career in the 1930's under her Aunt Lela's watchful eye. As she deliberates between an acting or writing career, she has several short-lived romances, and meets a number of famous Hollywood friends.

I wanted to read this novel because I love classic Hollywood and the Ginger Rogers mention in the book blurb was intriguing. I love the old game show What's My Line? and have always especially enjoyed Bennett Cerf on that show. I also sell vintage children's books, and love finding, researching, and selling old Random House editions including Dr. Seuss books. I had no idea when I picked this book up that Phyllis Fraser was the wife of Bennett Cerf - and was part of the publication of the early Random House I Can Read books.

I absolutely loved this book and am already recommending it to friends who love old movies.  It gives a rare behind the scenes glimpse of Hollywood in the 1930's.  I loved, thanks to the book, visiting the Garden of Allah where Ginger Rogers, her mother, and Phyllis lived. This famous apartment building had a fountain full of goldfish and famous (and soon-to-be-famous) Hollywood names lounging around the swimming pool. Phyllis also becomes friends with the ill-fated Peg Entwhistle, who committed suicide by jumping off the Hollywood sign.  Her other famous friends include Anne Shirley, John Payne, Betty Furness, and a young Katherine Hepburn.

The novel spans from 1931 - 1947. The chapters were relatively short but pithy and full of anecdotes and vividly drawn scenes that moved the storyline along.  The author does an exceptional job at capturing another time and place - and what a time and place it was!

I highly recommend The Limits of Limelight for anyone who enjoys historical fiction, and especially for anyone interested in old movies and Hollywood in the 1930's.

Pretty Oklahoma teenager Helen Nichols accepts an invitation from her cousin, rising movie actress Ginger Rogers, and her Aunt Lela, to try her luck in motion pictures. Her relatives, convinced that her looks and personality will ensure success, provide her with a new name and help her land a contract with RKO.  As Phyllis Fraser, she swiftly discovers that Depression-era Hollywood’s surface glamour and glitter obscure the ceaseless struggle of the hopeful starlet.

Lela Rogers, intensely devoted to her daughter and her niece, outwardly accepting of her stage mother label, is nonetheless determined to establish her reputation as screenwriter, stage director, and studio talent scout. For Phyllis, she’s an inspiring model of grit and persistence in an industry run by men.

While Ginger soars to the heights of stardom in musicals with Fred Astaire, Phyllis is tempted by a career more fulfilling than the one she was thrust into. Should she continue working in films, or devote herself to the profession she’s dreamed about since childhood? And which choice might lead her to the lasting love that seems so elusive? 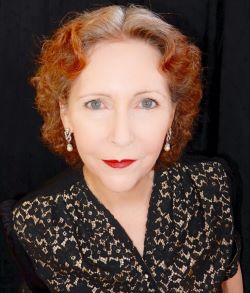 MARGARET PORTER is the author of more than a dozen works of historical fiction, including The Limits of Limelight (September 2021) and the award-winning Beautiful Invention: A Novel of Hedy Lamarr. Her critically acclaimed novels have been translated into several foreign languages. Other writing credits include nonfiction, newspaper and magazine articles, and poetry. She studied British history in the U.K. and afterwards worked professionally in theatre, film and television. Margaret and her husband live in New England with their dog, dividing their time between a book-filled house in a small city and a waterfront cottage located on one of the region’s largest lakes. When not writing, she keeps busy reading, tending her extensive rose gardens, or playing the mandolin. 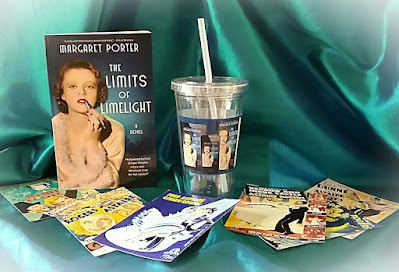 During the Blog Tour, we are giving away some fabulous prizes!

Choice of an autographed paperback or an ebook or an audiobook, plus an acrylic 16-oz sippy “go” cup with straw.

Choice of an autographed paperback or an ebook or an audiobook.

The giveaway is open internationally and ends on October 6th. You must be 18 or older to enter.

The Limits of Limelight 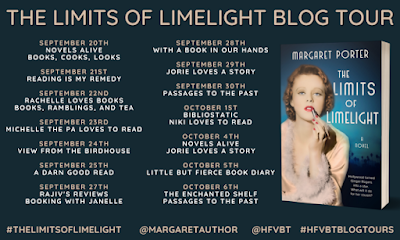