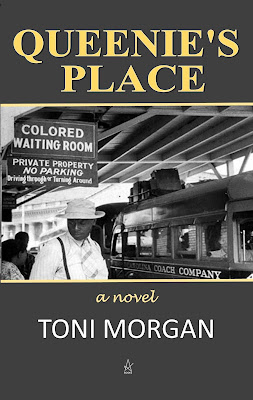 Queenie’s Place, set in rural North Carolina in the early seventies, is the story of an unusual sisterhood between a thirty-something white woman from California and a fifty-something black woman from the south.  From the moment Doreen Donavan sees the “Welcome to Klan Country” sign outside Goldsboro, North Carolina is one culture shock after another. She thinks the women she meets on the military base, where she and her family now live, are the dullest, stuffiest, most stuck-up women she’s ever run across, and frankly, they don’t think much of her either. She’s hot, miserable, and bored. Then one day, BAM, her car tire goes flat, right in front of a roadhouse outside the town of Richland, near where MCB Camp Puller is located. Inside, Queenie is holding forth at the piano. The place is jumping. Besides the music, there’s dancing and the best barbecue in North Carolina. Doreen’s husband, Tom arrives and must practically peel her out of the place. Queenie doesn’t expect to see Doreen again, but Doreen comes back and their unlikely friendship begins. Without warning, Queenie’s place is closed, the women accused of prostitution and bootlegging. A born crusader (she cut her teeth demonstrating against the Vietnam War—yes, even with her husband over there), Doreen quickly dons her armor and saddles up. Things don’t go quite as planned. 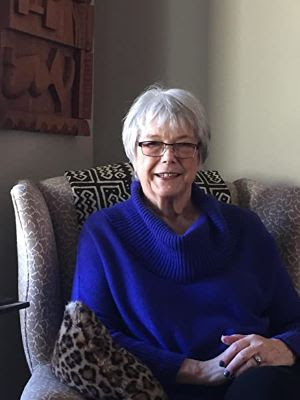 A longtime military spouse, TONI MORGAN has lived in many parts of the US and also for nearly four years in rural Japan. There she had the good fortune to work part-time in a Japanese pottery factory. That rich experience led to the first in her WWII trilogy ECHOES FROM A FALLING BRIDGE, which gives a unique view of life in rural Japan during the war. Second in the trilogy is HARVEST THE WIND, partially set in a Japanese internment camp in Idaho’s Magic Valley. The third in the series is LOTUS BLOSSOM UNFURLING, which continues the saga after the war ends. She also wrote PATRIMONY, and TWO-HEARTED CROSSING, companion books set in Montreal Quebec Canada during the Quebec Separatist Movement and 20 years later, in northern Idaho. Her novel QUEENIE’S PLACE is a 2019 National Book Award in Literature nominee. Her short stories have appeared in various literary magazines and journals, and her short story “Tin Soldier” was included in MOORING AGAINST THE TIDE, a creative fiction and poetry textbook published by Prentice Hall. Her most recent release is BETWEEN LOVE AND HATE, a collection of short stories, including Pushcart Prize nominee “The House on East Orange Street” and the aforementioned “Tin Soldier.”

The giveaway is open to the US only and ends on April 2nd. You must be 18 or older to enter. 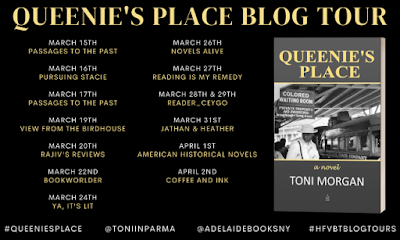