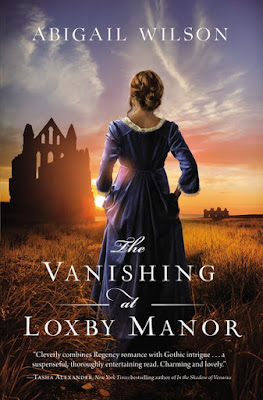 The Vanishing at Loxby Manor is a historical novel set in Regency (1816) England.  Charity Halliwell returns to her hometown to stay with lifelong family friends for a year. Her family has traveled from Ceylon to America. She was assaulted in Ceylon and is still feeling very fragile. She longs for the safety of her hometown and the family that includes her best friend, Seline, and Seline's brother, Piers Cavanaugh, who was Charity's first love. However, Seline disappears under mysterious circumstances and Charity works with Piers to find her.

I wanted to read this book because I love historical fiction, enjoy the Regency period, and was intrigued by the mix of romance and mystery in this novel.

This is such a stay-up-to-all-hours-reading novel! I was immediately engrossed in this book, with Seline's vanishing, mysterious lights in an abandoned abbey, rumors of a secret society -- not to mention the story of Charity and Piers.

I enjoyed the way this book combined several elements at once: Regency romance, mystery, and even some gothic elements.

The pacing is wonderful, with many twists and turns along the way.  Just when I thought I had it all figured out, there was another unexpected turn.

Charity is a strong protagonist, vulnerable and caring. Piers seems gruff at first but he shows himself to be a man who cares deeply about his family and those he loves.  As a reader I felt invested in their story.  I loved the way it unfolded slowly, as they both came from places where they were hurt to  slowly draw together. This was a perfect description:

"And here we were sharing in the same comfort and affection we had so many times before, but with one terribly painful caveat— there would never be anything more between us. His shame was a public one; mine private. We were standing on two very different mountain peaks yet staring at the valley below with no possible way to meet in the middle" (eBook location 2022).

I highly recommend The Vanishing at Loxby Manor for fans of historical fiction, especially romantic suspense and Regency settings. This is my first read by Abigail Wilson, but I look forward to reading her other novels in the future.

A story of second chances and secrets, this mysterious Regency romance will transport you to 19th-century England as one young lady reunites with her childhood love to find his missing sister.

Her friend is missing.

After five years abroad, Charity Halliwell finally returns to Loxby Manor, the home of dear friends—and her lost love. No longer a young girl, she is now haunted by a painful secret and the demise of her dreams. Instead of the healing and happiness she hopes to find, she encounters a darkness lurking in the shadows of the once-familiar house. When her friend, Seline, disappears the very night of her arrival, Charity is determined to uncover the truth.

Her only hope is the man who broke her heart.

Branded a coward, Piers Cavanaugh has lived the last five years as an outcast far from his family home. When his sister presumably elopes with a stable hand, Piers joins forces with an unlikely partner—the one woman he thought he’d never see again. Together they launch an investigation that leads to strange nightly meetings in the ruins of an old abbey and disturbing whispers of a secret organization. The more they learn, the more desperate the situation becomes.

The house seems determined to keep its secrets.

As they struggle to piece together the clues, Charity and Piers also endeavor to rebuild their friendship. One cryptic letter changed everything between them. To find happiness they will have to overcome the grief and shame keeping them apart. But first they must discover why Seline vanished and confront the growing fear that she may never return.

Settle in, because once you start The Vanishing at Loxby Manor, you won’t be able to put it down. 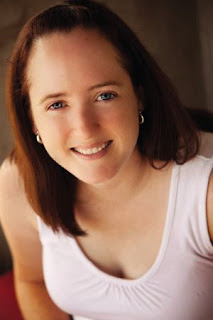 Abigail Wilson combines her passion for Regency England with intrigue and adventure to pen historical mysteries with a heart. A registered nurse, chai tea addict, and mother of two crazy kids, Abigail fills her spare time hiking the national parks, attending her daughter’s gymnastic meets, and curling up with a great book. In 2017, Abigail won WisRWA’s Fab Five contest and in 2016, ACFW’s First Impressions contest as well as placing as a 2017 finalist in the Daphne du Maurier Award for Excellence in Mystery/Suspense.

Enter to win a copy of The Vanishing at Loxby Manor by Abigail Wilson! Five copies are up for grabs!

The giveaway is open to the US only and ends on February 5th. You must be 18 or older to enter. 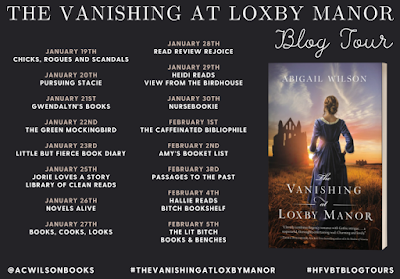