Book Spotlight and Giveaway - No One Like You by Kate Angell 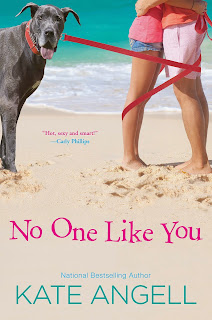 No One Like You
Barefoot William # 4
By: Kate Angell
Releasing April 28th, 2015
Zebra
Blurb

No One Expects a Curveball

For Rylan Cates, the gloriously sunny beachside town of Barefoot William may be home, but the pro baseball player needs to focus on spring training. Hiring a personal assistant to keep him and his four dogs organized for the next eight weeks is the first step—and Beth Avery is the perfect pinch hitter.

Beth is still looking for her place in the world, and a couple months caring for Rylan’s two dachshunds, his golden retriever, and a Great Dane named Atlas should shore up her finances before she moves on. Except it’s Atlas who won’t budge, pushing her toward tanned, scruffy, sexy Rylan every chance he gets. One more strike and she’s calling the dog out—unless she and Rylan admit that the attraction they’re feeling is a game-winning grand slam…

Dog playing dead in the middle of the road. Beth Avery couldn’t believe the black Great Dane had stopped, dropped, and rolled onto his side. He had a mind of his own and was testing her patience. She shook her head. She should never have applied for the personal assistant position. Dog walker wasn’t on her résumé.

The big boy couldn’t be coaxed or talked from the crosswalk at Center Street and Egret Way. Nothing worked. He’d lain down and stayed down. All one hundred and fifty pounds of him.

The situation was hopeless.

Beth tugged gently on the leather leash attached to his harness. “Up, Atlas, up,” she pleaded again.

Not a flicker of his ears. He even closed his eyes. What if he was sick or hurt? She stared at his chest. The rise and fall was slow and peaceful. Had he fallen asleep?

Atlas was the alpha dog of the four dogs she was walking. Dismayed, she watched the golden retriever and two dapple dachshunds follow his lead. They, too, settled on the asphalt. The dachsies, Oscar and Nathan, turned onto their backs so the sunshine could warm their bellies. They stretched, yawned, looking way too comfortable.

What was she to do? Beth clutched the loop handles on the leashes so tightly they left an imprint on her palm. For a beat, she thought about letting go. See what they would do. It couldn’t be any worse than watching them sunbathe on the road. She wasn’t a dog person. She favored cats. So how was it that she found herself in this predicament at ten a.m. on a Monday morning?

She knew why. She was so desperate to find work, she’d somehow missed the dog walking requirement in the ad. She was so excited she’d been called back for a follow-up interview with Rylan Cates for the assistant position, she didn’t dare tell him she had no experience with canines. He’d met with people all week and had narrowed his choices to three women, herself included.

The final applicants went on to walk, feed, and bathe his dogs. She had no idea how the other ladies had fared before her, although Atlas smelled profoundly doggie. Beth shook her head to clear her thoughts. She wasn’t doing all that well, either.

She’d walked the pack for close to an hour, up and down the streets of Olde Barefoot William, where the homes were handed down through generations. She’d fallen in love with the beachside town, which was as eclectic in its architecture as it was harmonious. William Cates had founded the community. Here lay the inner circle. The old Florida-style cottages were quaint. The houses were shingled and shuttered, with wide porches. They’d withstood hurricanes and time. A few had had minor facelifts.

Enormous evergreens lined the narrow two-lane road. Ancient moss clung to the cypress. The sun cast shadows through the scarlet-flowered branches of the Royal Poinciana trees that cornered the street. The scent of plumeria, gardenia, and hibiscus was heavy on the air. Sprinklers on automatic timers kicked on, watering lawns.

Only three blocks from Rylan’s house, Beth sighed heavily. The neighborhood was momentarily quiet. No cars and no joggers. No one to witness the sleeping dogs. Thank goodness. How was she going to explain she’d fallen off schedule because Atlas pulled a Rip van Winkle? Baths needed to be given to the dogs before noon. Ry had handed her a canine cookbook for their food. They ate organic. A blender and baking were involved. Lunch would be late.


Determined to find a solution, she transferred the leashes to one hand, and then patted the back pocket on her cutoff jeans with the other. She had one trick up her sleeve she’d yet to play. She’d purposely changed her clothes and had dressed down for the walk. Had to. Drool stained white linen slacks. Dirty paws would leave permanent marks. She couldn’t afford cleaning bills. Not in her current economic state.

Sweetening her tone, she tried, “Atlas, treat? Yum, yum.” She smacked her lips.

Treat didn’t get the slightest reaction from the Dane, but the other dogs perked up. The two dachshunds scrambled to their feet and the golden retriever looked at Atlas then back to Beth. Rue was slow to make her decision.

“Oatmeal-apple biscuits,” Beth said, enticing the golden with a handful of snacks she pulled from her denim pocket.

Rue sniffed the air, then nudged Atlas with her nose, but the Dane wouldn’t budge. The retriever slowly rose.

Three up, and one to go. A minor victory, Beth thought.

The dachsies and golden ate their snacks, then eyed Atlas once again, waiting for him to make his move. Or not. Beth agonized over the moment until inspiration struck. Looping the leashes over her wrist, she crouched down near the big dog. There, she quickly tied her retro red Keds. Atlas had stomped all over her feet when he’d spotted a squirrel. She’d tripped twice over the loose laces.

Leaning forward, her cutoffs rode up and snugged her bottom. The fringe tickled the tops of her thighs. Her bright blue crop top had shrunk in the dryer making the back hem even with her sports bra. The sun kissed her bare skin.

She didn’t care if she looked ridiculous, whispering to the Dane. She needed this job. She drew in a breath and started making promises that she never planned to keep, sweet-talking him. “No organic food for you, Atlas. I’ll cook you a big, juicy steak if you’ll get up.”

The Dane cracked his eyelids, a good sign that he was listening.


“You can have the entire couch to yourself. I will stand for the remainder of my interview.” His tail thumped.

“We could even skip your bath.” She had dreaded it anyway. The shampooing might not be so bad. Rinsing him off would drench her. What other enticements could she offer?

“He doesn’t take bribes,” said a man from behind her. His voice was deep and concerned. “I’ve tried.”

Rylan Cates’s sudden arrival took her by surprise. Beth sat down hard on the asphalt. Small rocks jabbed her bottom. She jarred her tailbone. Winced. His shadow loomed over her, larger than life. She turned slightly, tilted back her head, and worked her gaze up his body.

Navy flip-flops. Long legs dusted with brown hair. Gray board shorts. Lean hips. A hint of his package. Defined abs beneath a T-shirt scripted with I Came to Play. Muscled arms. Solid shoulders. A scruffy chin in need of a shave. A masculine mouth that tipped up at one corner. Straight nose. Eyes so blue they made the sky jealous. His hair was dark blond and shaggy. He looked more surfer than professional baseball player.

He was way hotter than she remembered. Or was it because she’d barely looked up from her hands folded in her lap during the interview? Interviewing was new to her. She’d been incredibly nervous then, and was even more so now.

He cleared his throat, shifted slightly, breaking her stare. He extended his hand, and she took it. He helped her up. His grasp was strong. His palm callused. He squished her fingers. She shook out her hand when released and brushed pebbles from her thighs and butt cheeks. Tugged down her top then faced him.

Her stomach tightened, her mind working overtime imagining what he must be thinking. Where had he come from? she wondered, glancing along the street. She hadn’t heard him approach, but soon understood why. He drove a McLaren. The black sports car was built for stealth and speed and was good for sneaking up on someone. Especially someone walking his dogs. He could easily spy on her. It was parked against the curb, looking shiny and pricey against the backdrop of aging homes.
He ran one hand down his face. “Why is Atlas sleeping in the street?”
“He needed a nap,” was said with more snark than she’d intended. She had never been more frustrated.

“He can’t stay there all day,” he told her. “Traffic picks up closer to noon.”

She tried to read his expression. Was he amused or angry? She couldn’t tell and released a short breath. “I’m open to suggestions.”
He stuck his hands in the pockets of his board shorts, rocked back on his heels. She couldn’t believe he had the balls to debate helping her.
Moments passed before he said, “Give him Rue’s leash so he can walk her home.”

A dog walking a dog? Her eyes widened. Surely he was joking.

“The big boy likes to be in control,” Rylan explained as if she should have known that and adjusted her dog walk- ing style. “He’s had a crush on Rue since they were puppies. She won’t mind.” Ry paused, looked her in the eye. His lips twisted. “Staring at me like I’m crazy won’t get him up.”

She blushed, embarrassed by her inability to manage Atlas. He hadn’t taken to her, but it hadn’t been for lack of trying. She wondered if the other applicants had won him over. Perhaps this job wasn’t meant for her after all. A position stocking shelves at Crabby Abby’s General Store or scooping ice cream cones at The Dairy Godmother might be a better choice. At either place she wouldn’t have to contend with scooping dog poop.

Rylan nudged her aside and took the leashes from her. Separating Rue’s hot pink lead from the others, he held it up for Beth to see the teeth marks—big indentations made by a big mouth—on the curved handle. No mistaking the Great Dane’s signature bite. “Watch this. Atlas, take Rue home,” he instructed the Dane.

Atlas stood up so quickly, Beth swore the earth moved.

Rising on his back legs, the dog put his paws on Rylan’s shoulders. They were eye to eye. Ry smiled and scratched the dog’s floppy ears. Atlas barked. It was a sight she’d never forget.

Dropping back down, Atlas snatched Rue’s leash from Ry’s hand and gripped it between his teeth. His tail whipped wildly. He was happy and attentive. He took off at a trot, dragging Rue several steps before she balked. He then slowed his stride so the golden could keep up and they headed down the sidewalk.

Author Info
National bestselling author Kate Angell lives in Naples, Florida. She’s an animal lover, avid reader, and sports fan. Bookstores are her second home. She takes coffee breaks at Starbucks. Her philosophy: Out of chaos comes calmness. Enjoy the peace. Please visit her on Facebook or at www.kateangell.com.