Book Review - Remember Whose Little Girl You Are by Ellen Nichols 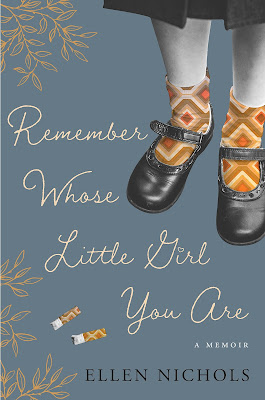 Remember Whose Little Girl You Are is the memoir of Ellen Nichols, who grew up in the Baby Boomer vintage south, the daughter of a Methodist minister. This book chronicles her life from early childhood through college.

I wanted to read this book because I found the time period and setting appealing.  I also grew up in a socially progressive Christian family in the Deep South, but about 20 years after the period chronicled in this book.  I found it interesting how much had changed and how much was still the same as well.

This is a charming book. I have been thinking about it since I closed the cover.  The author is a born storyteller.  It is a very short book (116 pages) with short chapters as well.  Ellen Nichols packs a lot into those chapters, though.  Her storytelling is natural and breezy, as if she was sitting beside you and leaning over to say "oh - and then this happened!"

There are some hilarious stories about her early childhood growing up in Methodist parsonages across the south.  She was the proverbial "wild child" preacher's kid (PK), ready to throw off her clothes or run around with boys who were eager to do her bidding as a very young girl.  I laughed out loud several times at stories, like the incident when she and a little boy took the church collection money and distributed it to friends -- until her mother found out and she went back around to collect it again.

She chronicles racial issues as well, as they touched her young life and the lives of her forward thinking parents.  She writes of going to the back of the bus to sit as a statement.

She also chronicles the changes of the 1960's - a friend changed forever by Vietnam, freewheeling musicians, her early romances.  She had a young beau named Michael Edwards, who later dated Priscilla Presley, and Steve Young, who wrote the Eagles' "Seven Bridges Road" about her.

The author has a gift at evoking another time and place in passages like:

"One steamy summer night, he took me to a party in the backyard of a friend of his who had hung Japanese lanterns from the tree branches.  Because of the intense humidity, each lantern had a misty aura wisping around it.  Hundreds of swirling fireflies added to the feeling of being in an exotic, tropical location.  We drank beer, ate potato chips and sandwiches, and danced to the latest music of Bo Diddley, Otis Redding, and Soloman Burke, getting closer to our dance partners with the downing of each beer.  But the true mating dance began when the host turned off the record player, picked up a trumpet, and played 'Tenderly' as if he were born in a New Orleans brothel" (pp. 54 - 55).

Ellen Nichols mentions a second volume in the works, and I hope it is published soon.  I want to read more!  I loved this little book and recommend it highly to anyone who enjoys southern storytelling and a glimpse of Mid-Century life in the Deep South.

Remember Whose Little Girl You Are captures the flavor of the Deep South like no author since Eudora Welty or Flannery O’Connor. Ellen Nichols captures the tenor of small-town Southern life in the fifties and sixties, with its vicissitudes and hilarity. One is captured with her openness and drawn deeply into the dialogue-so much as to, according to one reader, sometimes feel guilty of spying.

Read it and see if you want those times back-or are just relieved they’re gone.

Buy, read, and discuss this book: 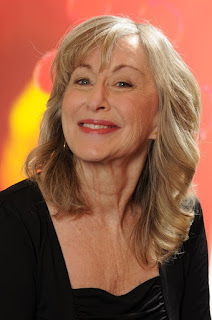 Ellen grew up in the American Deep South, but with a spirit of adventure, she went up to Toronto, Canada, to go to graduate school, and stayed 50 years.

No, she wasn’t a slow student, she just ended up getting married, raising a family, and building a successful career in charitable fundraising. She has been writing for a living for years, but was always writing for someone else. Her grant proposals, direct marketing letters, and especially her thank you letters, are legend. Her persuasive writing skills raised millions of dollars.

Those Canadians loved her tales about her southern life so much, she decided to write them down and they became Remember Whose Little Girl You Are.

Recently, she moved back down south where she lives on Santa Rosa Sound near Pensacola. And yes, she is now writing about all her Canadian adventures.

You can learn more about Ellen on her website.