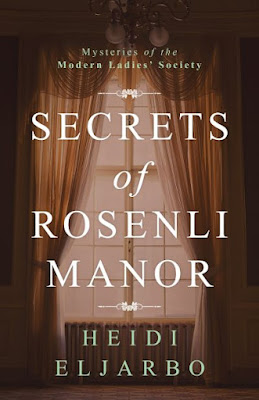 In 1898 Lilly Larsen learns that her Great-Aunt Agatha has passed away and she has inherited her large estate. As she moves into Rosenli Manor, she discovers a mystery about her own past and starts to look for answers.  At the same time she struggles to be taken seriously as an educated woman, and also finds romance.

I wanted to read Secrets of Rosenli Manor because I love historical fiction, am interested in the time period, and was intrigued by the Norwegian setting.

This is a short novel with a dreamy, fairytale-like tone. It was so unique and charming. This is the first book in the Mystery of the Modern Ladies Society series, and I certainly look forward to future reads.

Lilly is a likable protagonist who has a head for business in a time period when women were expected to be wives and stay at home. I admire her intelligence and courage as she faces unexpected danger while settling in at Rosenli Manor.

Her romantic interest, Paul, is a bit more enigmatic, but I hope there is more information about him in future books in the series.

Rosenli itself is almost another character in the series. I especially loved the details about the manor and the upstairs-downstairs life there.

I recommend this charming novel for fans of historical fiction, and especially for anyone interested in the turn-of-the-century time period.

It’s 1898, and Lilly has spent most of her life motherless and living with a father who never looks for a silver lining. When her great-aunt Agatha passes, Lilly’s existence takes a drastic turn. She packs her few belongings and moves into the old lady’s magnificent estate, Rosenli Manor.

In the days that follow, Lilly tries to understand who Agatha really was, and hidden secrets slowly rise to the surface. Her great-aunt’s glamorous legacy is not quite what Lilly had imagined. She must trust in newly forged friendships, and to her surprise, she discovers what it means to truly fall in love. But not everyone is happy about the new mistress of Rosenli.

Intrigue, mystery, and a touch of romance in the Norwegian countryside fill the pages of Secrets of Rosenli Manor. 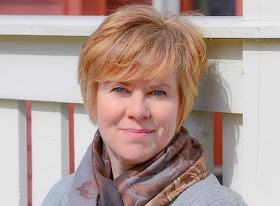 Heidi Eljarbo writes historical fiction. She grew up in a home filled with books and artwork and she never truly imagined she would do anything other than write and paint. She studied art, languages, and history, all of which have come in handy when working as a freelance writer, magazine journalist, and painter.

After living in Canada, six US states, Japan, Switzerland, and Austria, Heidi now calls Norway home. She and her husband have a total of nine children, thirteen grandchildren—so far—in addition to a bouncy Wheaten Terrier.

Their favorite retreat is a mountain cabin, where they hike in the summertime and ski the vast, white terrain during winter.

Enter to win a copy of Secrets of Rosenli Manor & Of Darkness and Light by Heidi Eljarbo!

The giveaway is open to the US only and ends on April 29th. You must be 18 or older to enter. 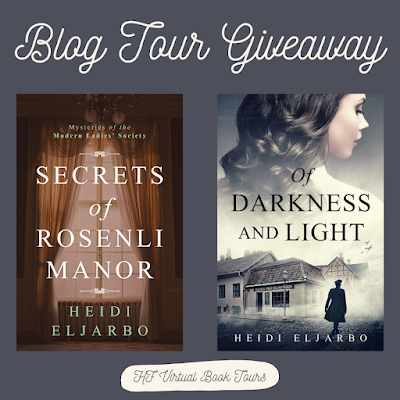