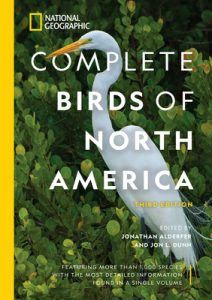 National Geographic's Complete Birds of North America is a beautiful, oversized book about birds.  The cover promises "More than 1000 species - the most detailed information in a single volume," and I certainly found this to be true.

I wanted to read this book because I have a lifelong love of birds -- my small business is even called Birdhouse Books! Every day when I am out walking on my own or with my dog, I look for birds and love to identify them. This big book of birds held a natural fascination for me.

This is truly an exceptional book for a bird lover. The book is divided into types of birds - for instance - Pigeons and Doves, Loons, Swallows, Larks, Mockingbirds and Thrashers, etc. Then if you look up a bird there is much more specific information, including illustrations of the bird, a map where the bird is found in North America, and: Identification (adult male, adult female, and juvenile), Status and Distribution, Breeding, and Population.  The common name of the bird is given along with the proper name - for instance Rock Pigeon, Columba livia.

I thought this book would be a field guide but am delighted to find it is the most fabulous encyclopedia of birds.  I have truly enjoyed looking up favorite birds, reading about them, and am sure I will consult with this book again and again as I see new birds on walks that I want to learn about.

National Geographic's Complete Birds of North America is a beautifully made book - big, oversized, with gorgeous illustrations. It would be an exceptional gift book for a bird lover.

More an encyclopedia than a field guide, National Geographic’s Complete Birds is a browsable treasure trove of facts. This comprehensive volume profiles every bird observable in the continental United States and Canada, featuring species accounts with details that include calls and songs, breeding behaviors, molting patterns, and the vast extent of their polar and neotropical migrations. The precision maps, illuminating photographs, and more than 4,000 exquisite pieces of annotated art make this the biggest and best bird book ever.

Information on more than 1,000 species and subspecies
Overviews of every family
Organization reflecting current taxonomy
850 range maps, more than half updated since the last edition
Sidebars on identification challenges such as distinguishing between Bay-breasted and Blackpoll Warblers in fall or separating the various species of white egrets

These 752 pages add up to a lifetime of learning for all devoted birders, from those just beginning birders to those who have been building their life lists for decades.

Book Review and Giveaway - Death on the Shelf: A Haunted Library Mystery by Allison Brook 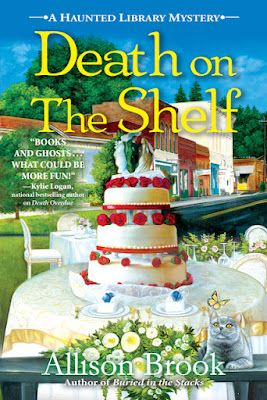 Death on the Shelf is the 5th book in the Haunted Library mystery series. Carrie Singleton, librarian and amateur sleuth, witnesses a murder at her best friend's wedding when the bride's cousin falls into a chocolate fountain. Carrie becomes involved in solving the mystery ... and also finding her ghostly librarian friend Evelyn's long lost brother.

I wanted to read this book because I have enjoyed every single book in the Haunted Library series. This is one of my favorite cozy series and it is one I have enthusiastically recommended to friends. The series has all the ingredients of a perfect cozy: a charming small town setting, a library, some romance, and a lovable pet (in this case, Smoky Joe, Carrie's cat).

This was a fun read. There were a wealth of solid suspects and I enjoyed solving the case right along with Carrie. The wedding was a strong setting for a murder because there were so many people there, including many plausible suspects.

I especially enjoyed Carrie and Dylan's romance in this book, as they moved closer.  Dylan, who also is an investigator (of high end items that are lost or stolen) is a great book boyfriend, supporting Carrie but also helping to keep her safe.

Since part of the wedding involves Carrie's best friend, Angela, she is in the book a lot, and so is Carrie's charming reformed thief dad, Jim.  And Smoky Joe the cat is his lovable self as well!

I recommend Death on the Shelf - and the entire Haunted Library series - very highly.  It is such a fun, fast moving read, and unique thanks to Carrie's ghostly friend Evelyn.

Clover Ridge librarian Carrie Singleton is thrilled to attend her best friend Angela’s wedding, but Angela’s family can be a bit…much. Angela’s wealthy cousin Donna hosts an extravagant bridal shower at her resplendent home, but the celebrations turn to gossip as the guests notice Donna’s surgeon husband, Aiden, spending a bit too much time with Donna’s cousin Roxy. At the wedding reception, the sweet occasion turns darkly bitter when Aiden topples into the chocolate fountain–dead.

The suspect list is as long as the guest list, and as difficult to sort out as the seating chart. A few of the top contenders on Carrie’s suspect list are the flirtatious Roxy, emotionally unstable since her recent divorce; Angela’s grouchy brother, who feels Aiden betrayed him; and Roxy’s scorned ex-husband. Even Donna may have had reason to want her husband dead. And Aiden’s gossipy office manager has plenty to say about them all.

Then another member of Angela’s family is murdered, making Carrie more determined than ever to find the killer. Can library ghost Evelyn and library cat Smoky Joe help Carrie solve the murders before she becomes the next of Angela’s wedding guests to head to the grave? 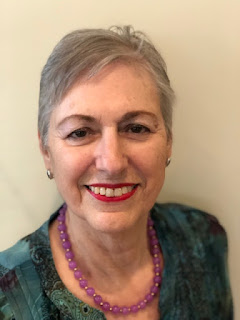 Library series. DEATH OVERDUE, the first in the series, was an Agatha nominee for Best Contemporary Novel in 2018. Other mysteries include the Golden Age of Mystery Book Club series and the Twin Lakes series.

Marilyn lives on Long Island, where many of her books take place. She loves traveling, reading, doing crossword puzzles and Sudoku, and chatting on FaceTime with her grandkids.