Happy almost-Valentine's Day! I have some fun vintage Valentines to share with you today. They are all by illustrator Pete Hawley. He is one of my Momma's favorite Mid-Century illustrators. He designed cards but also did famous ads for Bell Telephone, Coca-Cola, Gripper clothes for children, Florida oranges, Jantzen, Westinghouse, and more!  Best of all, each one of these Valentines features a dog in the illustration!

A little Beagle pushes a boy along as he plays the tuba. "Get in Step! Be My Valentine." 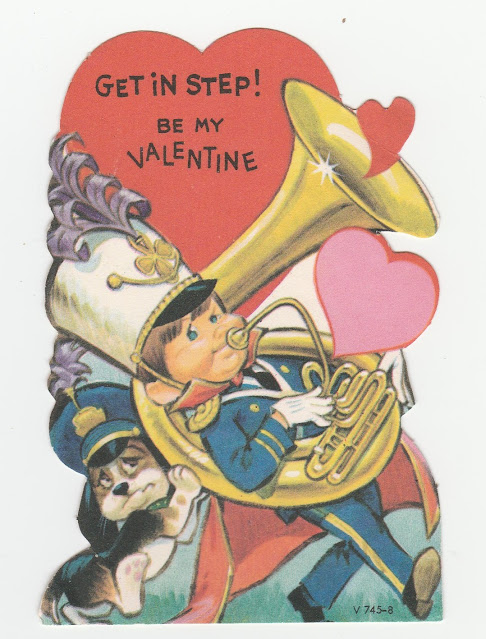 A boy travels to a heart-shaped moon in a rocket ship - along with his little shaggy dog. 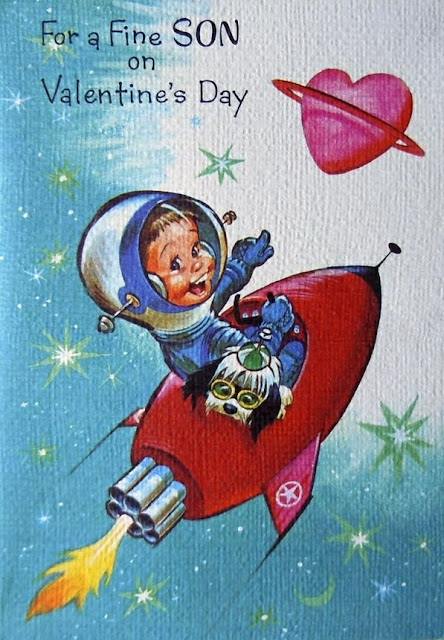 This is another astronaut theme Valentine: "You're A-OK with me, Valentine."  A beagle stands with the little boy in a space suit. 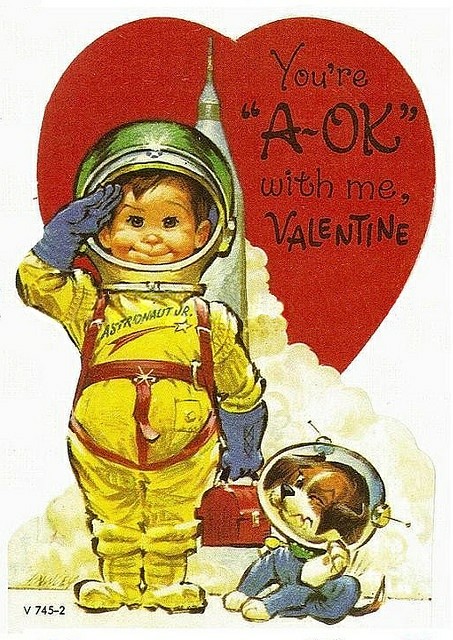 A girl and boy smile for their teacher. Their Cocker Spaniel went to school with them! 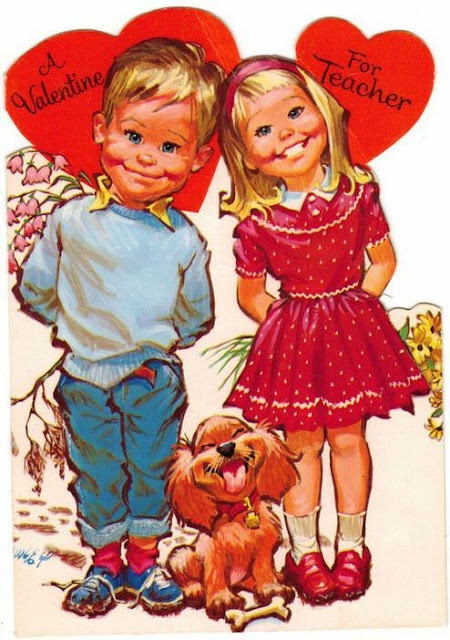 A little girl enjoys an ice cream cone as her Poodle watches.  "Mm-m-m-m you're nice, Valentine!" 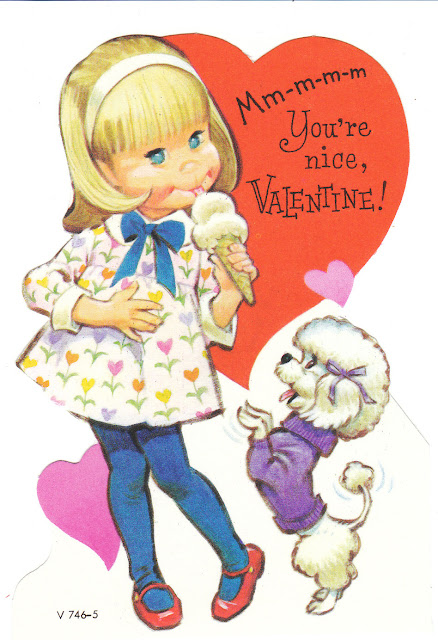 A girl talks on a telephone while her fluffy white dog waits patiently.  "I've got your number." 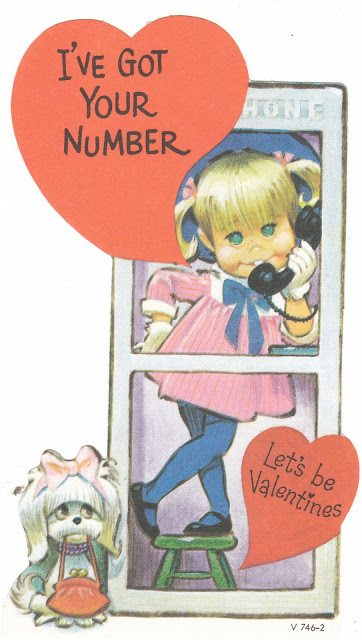 Best of all, a spaniel dog is featured front and center in this Valentine, riding a tricycle. "Doggone it!" 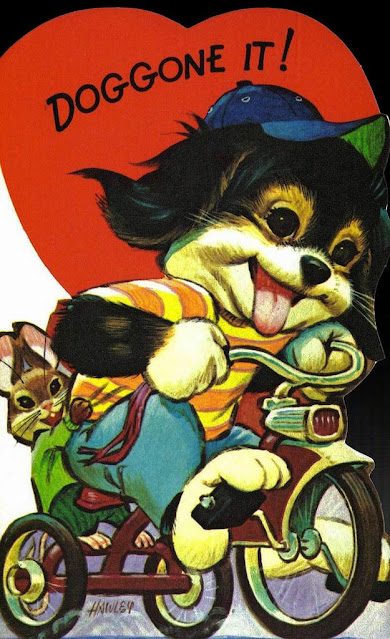 I hope you enjoyed these little vintage Valentines and I hope you have an extra nice Valentine's Day! 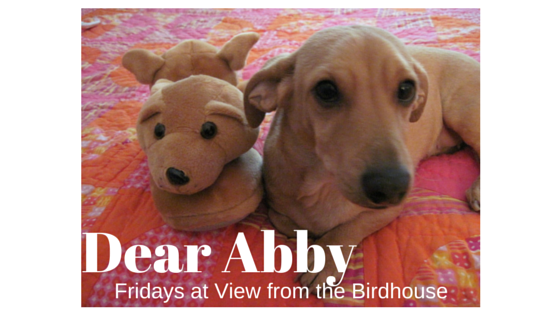 Book Review and Giveaway - The Heiress Gets a Duke (The Gilded Age Heiresses #1) by Harper St. George 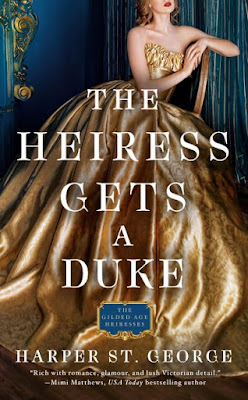 In 1874, August Crenshaw travels to London with her parents and sister Violet. Unbeknownst to August and Violet, their parents have decide to marry one of them off to a duke. The Crenshaws are wealthy but they want to be part of the aristocracy - even at the price of marrying off one of their daughters to attain this. Evan Sterling, the Duke of Rothschild, has a title and a number of estates, but he needs cash to repair the estates and support his mother and sisters.  Although the Crenshaws push for a match between their youngest daughter, Violet, and Evan, he is more interested in the oldest daughter, August, who is independent and fiery.

I will admit to judging a book by its cover because the cover of this book is beautiful and made me immediately want to read the novel!  I love historical fiction and am interested in the Gilded Age.

This is the first book in a new series. I flew through this read and have already looked to find out more about the next book in the series. I absolutely loved it! The Heiress Gets a Duke is such a smart, well written historical romance.

August is a bright woman with a head for business (she has helped in her family's business interests) and August and Evan have a meeting of the minds as well as an immediate attraction. They are my favorite fictional couple in quite a while, and I would love to read more of their story!

The period setting, 1874 - 1875 London, was perfection. I loved details like August's Worth gown, and the lovely (but in need of repairs) Rothschild estate.

Each chapter begins with a clever quotation, often about women's independence or relationships, i.e. "I would have girls regard themselves not as adjectives, but as nouns. ELIZABETH CADY STANTON" (eBook location 2636).

The Heiress Gets a Duke was a smart, lively, and fun read! I recommend it highly for fans of historical romance, and especially for anyone interested in the Gilded Age.

Even a fortune forged in railroads and steel can’t buy entrance into the upper echelons of Victorian high society—for that you need a marriage of convenience.

American heiress August Crenshaw has aspirations. But unlike her peers, it isn’t some stuffy British Lord she wants wrapped around her finger—it’s Crenshaw Iron Works, the family business. When it’s clear that August’s outrageously progressive ways render her unsuitible for a respectable match, her parents offer up her younger sister to the highest entitled bidder instead. This simply will not do. August refuses to leave her sister to the mercy of a loveless marriage.

Evan Sterling, the Duke of Rothschild, has no intention of walking away from the marriage. He’s recently inherited the title only to find his coffers empty, and with countless lives depending on him, he can’t walk away from the fortune a Crenshaw heiress would bring him. But after meeting her fiery sister, he realizes Violet isn’t the heiress he wants. He wants August, and he always gets what he wants.

But August won’t go peacefully to her fate. She decides to show Rothschild that she’s no typical London wallflower. Little does she realize that every stunt she pulls to make him call off the wedding only makes him like her even more. 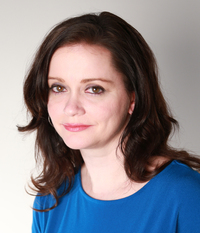 Harper St. George was raised in rural Alabama and along the tranquil coast of northwest Florida. It was a setting filled with stories of the old days that instilled in her a love of history, romance, and adventure. By high school, she had discovered the historical romance novel which combined all of those elements into one perfect package. She has been hooked ever since.

She lives in the Atlanta area with her husband and two children. When not writing, she can be found devouring her husband’s amazing cooking and reading. She would love to hear from you. Please visit her website at www.harperstgeorge.com. You can also find her on Facebook, Twitter, Instagram, Pinterest, and Goodreads.

The giveaway is open to the US only and ends on February 19th. You must be 18 or older to enter.

The Heiress Gets a Duke 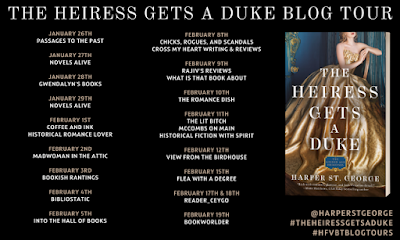 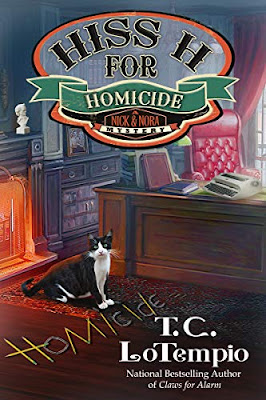 Nick and Nora are back in a tantalizing new mystery that’s far more dangerous than a game of cat and mouse . . .

Never one to turn away from a challenge—even when it goes against her better judgment—Nora Charles can hardly say no when an old friend of her mother’s comes to town seeking her help. The author of steamy romances has learned that her writing partner is severing their relationship and threatening to reveal dark and dirty secrets in a tell-all, and she pleads with Nora to intervene. Reluctantly agreeing to help, Nora pays a visit to the writing partner, ready to make her case—right up until the moment she discovers the woman’s lifeless body.

With the police convinced that Nora’s friend is the culprit, she and Nick begin delving into the dead woman’s past and her provocative tell-all. It soon becomes apparent that the woman had a knack for digging up dirt and wasn’t shy about exposing skeletons in closets, and before long Nora has a seemingly endless list of suspects who were at risk of having their darkest secrets revealed. With a police force intent on throwing the book at Nora’s friend and time running out, she and Nick must outwit a dangerous killer before they take their own secrets to the grave . . . 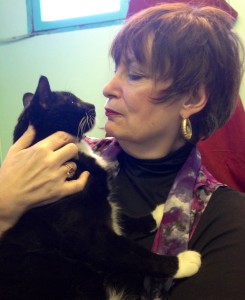 Author BioWhile Toni Lotempio does not commit – or solve – murders in real life, she has no trouble doing it on paper. Her lifelong love of mysteries began early on when she was introduced to her first Nancy Drew mystery at age 10 – The Secret in the Old Attic.  She and her cat pen the Nick and Nora mystery series originally from Berkley Prime Crime and now with Beyond the Page Publishing.  They also write the Cat Rescue series from Crooked Lane and the Pet Shop series, originally published by Midnight Ink and continued in 2021 with book two, KILLERS OF A FEATHER, from Beyond the Page. Catch up with them at ROCCO’s blog, catsbooksmorecats.blogspot.com or her website, www.tclotempio.net