I am happy to be back. I've missed catching up with you here. I hope your holidays were happy. Mine was nice - very relaxed. I got some new toys and treats (love both of those, of course!) and spent LOTS of time with Momma - that is the best.

Here are a few photos from Christmas day. I am relaxing with my new toys, a Rudolph the Red-Nosed Reindeer (thanks to my dachshund friend Emily!) and a Gumby doll. 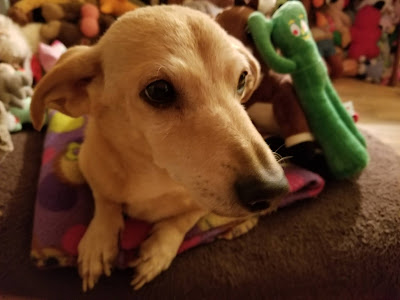 I am actually napping with my head on Rudolph here. I love to cuddle my toys like this. 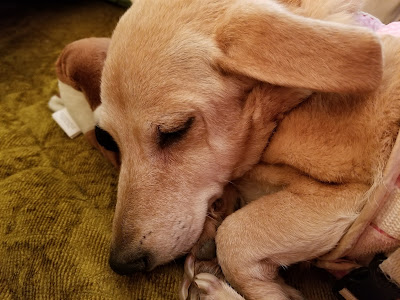 By evening I was feeling excited about the day and ready to play again: 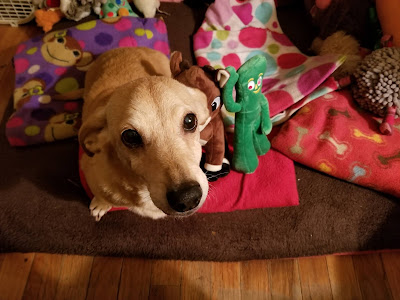 I'll keep this first 2021 post short and sweet. I look forward to visiting with you here during the upcoming year. 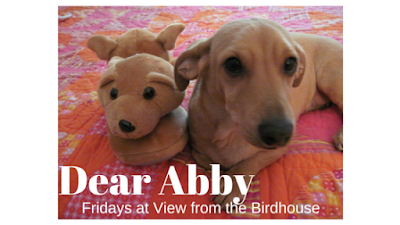 Book Review and Giveaway - Beauty Among Ruins by J’nell Ciesielski 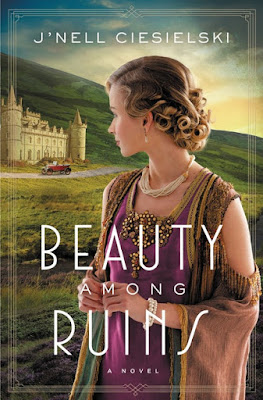 Lily Durham is an American socialite. Her parents, frustrated by her frivolous behavior, send her overseas during World War I. Lily volunteers with her cousin at a makeshift convalescent home in a Scottish castle. There she encounters the dashing but melancholic castle owner, Alec MacGregor, and they become involved in a series of mysteries that threaten the future of the castle.

I wanted to read Beauty Among Ruins because I love the 1910's time period and I was intrigued with the Scottish castle setting.

This is my first read by J'nell Ciesielski. I enjoyed her writing style and especially liked the way she set the scene with descriptions like:

"Inside it was difficult to keep anything on her face but awe. Gleaming mahogany floors opened up to a three-story great hall. Light filtered through the high-arched windows and scattered over the blue-and-gold rug and dark wood furniture. Oil paintings of kilted men with swords drawn and storm-ravished moors lined the walls. Centuries of masculine strength gazed upon all who dared enter, but a cold stillness hung in the air. As if the life were sealed behind the beaten stones." (eBook location 177).

Both Lily and Alec were a bit hard to get to know at first;  Lily comes across as flighty in the early chapters, and Alec seems very gruff. However, as they begin to open up to each other, I saw new depths in both characters and came to like them both very much -- pulling for them to come together and find happiness.

I enjoyed the mystery aspects of this novel as well; it added something unique to the story. This novel has a unique and appealing blend of romance, historical fiction, and mystery.

I recommend Beauty Among Ruins for fans of historical fiction, and especially for anyone who is interested in the World War I time period.

In Ciesielski’s latest sweeping romance, an American heiress finds herself in Scotland amid the fallout of the Great War, and a wounded Scottish laird comes face-to-face with his past and a woman he never could have expected.

American socialite Lily Durham is known for enjoying one moment to the next, with little regard for the consequences of her actions. But just as she is banished overseas to England as a “cure” for her frivolous ways, the Great War breaks out and wreaks havoc. She joins her cousin in nursing the wounded at a convalescent home deep in the wilds of Scotland at a crumbling castle where its laird is less than welcoming.

Alec MacGregor has given his entire life to preserving his home of Kinclavoch Castle, but mounting debts force him to sell off his family history bit by bit. Labeled a coward for not joining his countrymen in the trenches due to an old injury, he opens his home to the Tommies to make recompense while he keeps to the shadows. But his preference for the shadows is shattered when a new American nurse comes streaming into the castle on a burst of light.

Lily and Alec are thrown together when a series of mysterious events threatens to ruin the future of Kinclavoch. Can they put aside their differences to find the culprit before it’s too late, or will their greatest distraction be falling in love? 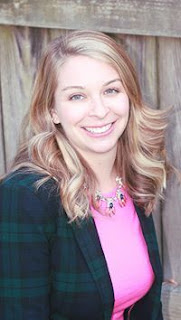 With a passion for heart-stopping adventure and sweeping love stories, J’nell Ciesielski weaves fresh takes into romances of times gone by. When not creating dashing heroes and daring heroines, she can be found dreaming of Scotland, indulging in chocolate of any kind, or watching old black and white movies. Winner of the Romance Through the Ages Award and the Maggie Award, she is a Florida native who now lives in Virginia with her husband, daughter, and lazy beagle.

We have 5 paperback copies of Beauty Among Ruins up for grabs!

The giveaway is open to the US only and ends on January 22nd. You must be 18 or older to enter. 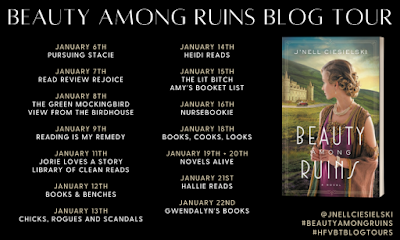