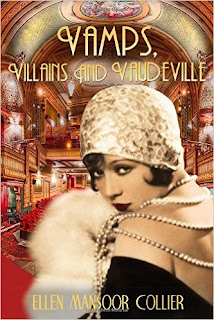 
In 1920s Galveston, society reporter Jazz Cross is in for a surprise when she attends a traveling vaudeville show with her beau, Prohibition Agent James Burton, and discovers that an old flame acts in the production. That night, they find a stabbing victim behind the Oasis — her half-brother Sammy’s speakeasy — who’s identified as an actor in the troupe. When the victim disappears and later turns up dead, Jazz must help prove that Sammy wasn’t the killer.

Meanwhile, a ring of jewel thieves is turning up all over town, robbing rich tourists of their precious gems. After a second vaudeville actor is found dead, Jazz discovers that the events behind the scenes are much more interesting than the outdated acts onstage.

To make matters worse, Sammy’s old nemesis demands that he settles a score and forces him into yet another illegal scheme. Can Jazz help solve the murders and prove her brother’s innocence—so he can escape the Downtown Gang for good? 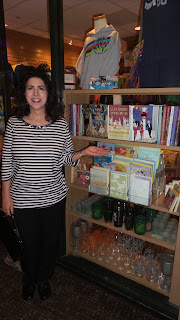 Ellen Mansoor Collier is a Houston-based freelance magazine writer and editor whose articles and essays have been published in a variety of national magazines. Several of her short stories have appeared in Woman’s World. During college summers, she worked as a reporter for a Houston community newspaper and as a cocktail waitress, both jobs providing background experience for her Jazz Age mysteries.

A flapper at heart, she’s worked as a magazine editor/writer, and in advertising and public relations (plus endured a hectic semester as a substitute teacher). She graduated from the University of Texas at Austin with a degree in Magazine Journalism and served on UTmost, the college magazine and as president of WICI (Women in Communications).

FLAPPERS, FLASKS AND FOUL PLAY is her first novel, published in 2012, followed by the sequel, BATHING BEAUTIES, BOOZE AND BULLETS, released in May 2013. She lives in Houston with her husband and Chow mutts, and visits Galveston whenever possible.

“When you grow up in Houston, Galveston becomes like a second home. I had no idea this sleepy beach town had such a wild and colorful past until I began doing research, and became fascinated by the legends and stories of the 1920s. Finally I had to stop researching and start writing, trying to imagine a flapper’s life in Galveston during Prohibition.”