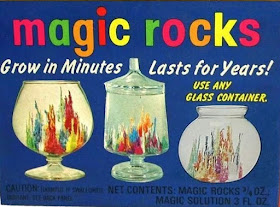 Do you remember Magic Rocks?   These were sold at dime stores and in the back of comic books.  I remember buying a set at a Stuckey's on vacation to Florida one year.  The toy I remember looks like the picture above.  Here is a picture of an earlier Magic Rocks set: 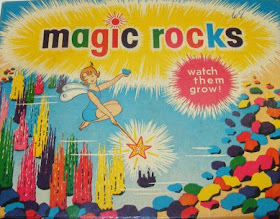 How they work: you get liquid sodium silicate and colorful rocks (actually metallic salts).  You put the rocks in a pretty glass container, and then the sodium silicate (mixed with water), and the rocks grow.  I googled and this simple science toy is still around!

I always liked these ... they reminded me a bit of stalagmites (I liked caves, too!) and also a bit of those color drip candles at Italian restaurants back in the day.

Here's a little minute and a half time lapse video:

Who remembers this science toy?  I'd love to hear from you in the comments, below.
Birdhouse Books at 7:00 AM 5 comments:
Share

Welcome to the cover reveal of Caught Bread Handed by Ellie Alexander! This is the fourth book in the Bakeshop Mystery series and releases June 28 by St. Martin's Press. 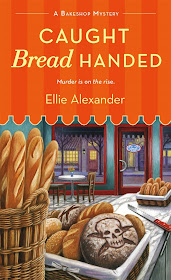 About the Book:
Welcome to Torte—a friendly, small-town family bakeshop where the oven is heating up as high as the body count…

Jules Capshaw is still chewing over her husband Carlos’s return to Ashland, Oregon. Could there be too many cooks in the kitchen? Whatever is stirring between those two will have to wait. Despite the Oregon Shakespeare Festival being dark for the winter, the bakeshop is bustling, the dough is rolling, and there’s no rest for the weary… especially when murder is thrown into the mix.

When Mindy Nolan, the owner of a new restaurant in town, turns up dead, the batter at hand thickens. Jules knows that there was bad blood between Mindy and others in town, and tracking the killer could prove to be an unwelcome treat. And to top it all off, there’s Carlos, who is pleading—with those delicious dark eyes and sexy Spanish accent—for Jules to take him back. Is home where the heart is or will she make a fresh start… and risk getting burned?
Goodreads | Amazon | Vintage Books
***

Ellie Alexander is a Pacific Northwest native who spends ample time testing pastry recipes in her home kitchen or at one of the many famed coffeehouses nearby. When she’s not coated in flour, you’ll find her outside exploring hiking trails and trying to burn off calories consumed in the name of research. Follow her on Facebook or Twitter to learn more. 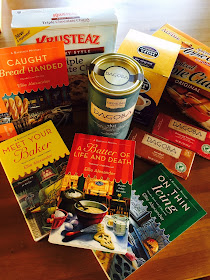 Signed copies of the first 3 books in the series plus a signed cover flat of CAUGHT BREAD HANDED
Triple chocolate chip cookie mix
Oregon Chai
Dagoba (Ashland) chocolate chai
Dagoba chocolates
Spiced apple cider
Open to US addresses only
Ends March 23, 2016
Prizing is provided by the author, hosts are not responsible. Must be 13 or older to enter and have parental permission if under 17. Void where prohibited by law. No purchase necessary to win.
a Rafflecopter giveaway

This event was organized by CBB Book Promotions.