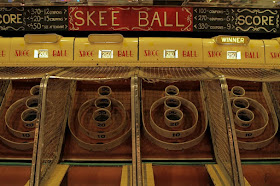 I loved carnivals and fairs as a kid (still do!).  My favorite stop was always skee ball on the carnival midway.  You could roll a ball down the narrow lane into one of the waiting rings.  You would get tickets based on how many points you made, and you could trade them in for a prize (usually a stuffed animal).  Seeing this image reminds me of so many fun trips to the carnival, especially in summer time.  Carnivals like this were always found by the beach on vacations.

Do you remember skee ball?  When was the last time you played?  I would love to hear from you in the comments, below.
Birdhouse Books at 7:30 AM 6 comments:
Share

Author Interview and Giveaway: Dying for the Past by TJ O'Connor 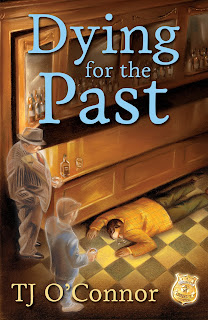 Dying for the Past
(A Gumshoe Ghost Mystery)

Dying is not for the faint of heart . . .
. . . Neither is the murder of a mysterious philanthropist with ties to the Russian mob and 1939 gangsters.

At an A-list charity ball organized by his wife, Angela, former detective Oliver “Tuck” Tucker is doing his best to prove that ghosts know how to have a good time—until a man is murdered in cold blood on the dance floor.

Never one to let a mystery go unsolved, Tuck is on the case with help from Angela and his former police-detective partners. Together, they must be the first to read “the book”—deceased gangster Vincent Calabrese’s journal that names names and reveals the dirty secrets of several modern-day spies.

As Tuck learns the book’s secrets, he begins to unravel his own family’s wayward past, leading to the question—is being a ghost hereditary? Even while chasing a killer, the biggest challenge Tuck must conquer is how to be back amongst the living . . . but not one of them. 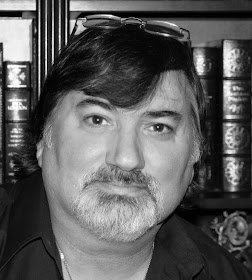 View from the Birdhouse Interviews TJ O'Connor:
Birdhouse: When did you realize you wanted to be a writer?
TJ:  In the fifth grade believe it or not. I had a tough childhood at times and began reading in the fifth grade as a diversion and safe place to hide. After reading my first mystery, the Mystery of the Witches’ Bridge by Barbee Oliver Carleton, I became a ferocious reader. Then, after Mystery of the Haunted Mine by Gordon D. Shirreffs, I knew I wanted to be a writer. I began writing silly plays and short stories for my friends and with some encouragement from my grade school teachers, knew I could do it one day. I began writing a novel in high school that obviously was the worst drivel I’d ever read. My first complete novel I wrote while in Greece as an anti-terrorism agent with the military. It wasn’t great but it wasn’t horrible. I kept it up for years trying different topics but never had the time to focus on being published. It wasn’t until about 2004 that I got serious and began truly crafting a novel with the intent on being published. It took me three tries before I found an agent—the amazing Kimberley Cameron—and got my first publishing contract with Midnight Ink.
Birdhouse: What was your favorite book as a child?

I have a computer file full of summaries and concepts for a couple dozen more books. If only I had the time to write them all!

Tj O’CONNOR IS THE 2015 GOLD MEDAL WINNER OF THE INDEPENDENT PUBLISHERS BOOK AWARDS FOR MYSTERIES and the author of Dying to Know and Dying for the Past, available in books stores and e-books from Midnight Ink. His third paranormal mystery, DYING TO TELL, will be released January 2016. He is currently working on a traditional mystery and a new thriller. Tj is an international security consultant specializing in anti-terrorism, investigations, and threat analysis—life experiences that drive his novels. With his former life as a government agent and years as a consultant, he has lived and worked around the world in places like Greece, Turkey, Italy, Germany, the United Kingdom, and throughout the Americas—among others. He was raised in New York’s Hudson Valley and lives with his wife and Lab companions in Virginia where they raised five children. Dying to Know is also a Foreword Review’s 2014 INDIEFAB Book of the Year Award finalist.

Learn about Tj’s world at: 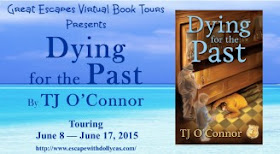