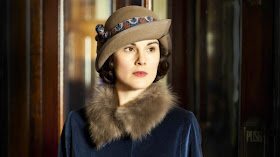 What Happened (A Very Short Summary)

Lots happened!  Mary and Tony chatted at the hotel as she prepared to leave for Downton.  He said he wanted to observe all her routines since they would govern his life.  After Tony left, she had a forlorn expression.  Mary was found out by the Dowager Countess, who was not at all pleased.  A London bobby investigated the death of Mr. Green, and Bates came under suspicion.  Drew's wife decided not to share Marigold with Edith.  Cora's admirer, Simon Bricker, caused conflict in her marriage.  The Dowager Countess met with an old admirer - a Russian prince.

Line of the Night

Character Of the Week


The Dowager Countess has a past!   This was particularly interesting after her umbrage at Mary's behavior.

A tie between Mary being found out by the Dowager, and the Dowager reuniting with her Russian admirer.

What I Hope Will Happen Next (All Speculation - No Spoilers!)


I hope that Mary painlessly breaks things off with Tony.  I hope Tom drops the awful Sarah Bunting.  I hope that Edith is reunited with her baby.  I also hope that Isobel finds happiness, since there was a hint of a big scene with Lord Merton in the trailer for next week.

What did you think of tonight's show?  What would you like to see happen next?  I would love to hear from you in the comments, below.
Birdhouse Books at 10:24 PM 4 comments:
Share
‹
›
Home
View web version