Downton Abbey - Season 5, Episode 1: A Shaking Of the Ground 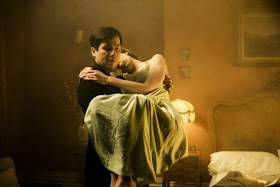 Hooray!  Downton Abbey is back.  It's been a long wait between seasons in the U.S.   I'm going to try something different this season.  Instead of full recaps, I'm just going to chat about the show here.  I really enjoy chatting Downton, and hope you will also post your thoughts in the comments section.

What Happened (The Very Short Version)

Life at Downton Abbey is changing.  Carson says:  "I feel a shaking of the ground I stand on. That everything I believe in will be tested and held up for ridicule over the next few years."

Edith's baby, Marigold, is staying with farmer Drew and his family.  Isobel is being courted by Lord Merton, although the Dowager Countess is trying to thwart the process.  Carson has been asked to coordinate a war memorial in the village (instead of Lord Grantham).  School teacher Sarah Bunting is continuing her friendship with Tom, and raising the ire of Lord Grantham with her outspoken political views at a party.  Miss Baxter confessed her secret past (as a jewel thief!) to Cora, rather than having Barrow tell on her.  Tony Gillingham asked Mary to go away with him on a trip so they can get to know each other before they move forward to get engaged.  (The scandal!)   Edith inadvertently set a fire in her room.  During the evacuation, Jimmy's former employer visited and they got caught sleeping together.  And Molesley colored his hair (very unattractively).

Character Of the Week

Edith is my choice as character of the week.  She longed to be with her baby, Marigold, and the pain she felt leaving her with the Drews was palpable.  Later in her room, she also missed Michael Gregson ... which resulted in her tossing a book toward the fireplace and setting fire at the Abbey.

Molesley's newly blue/black dyed hair.  Lord Grantham remarked:  “Molesley – you look very Latin all of a sudden. Do you have Italian blood?”

The fire!  This was the most dramatic moment of the night.  I'm glad everyone got out of the house safely - and (always the dog lover) I will admit I felt a real relief when I saw Isis safely out.

What I Hope Will Happen Next (All Speculation - No Spoilers!)

I hope that:
... Edith finds a way to be with her baby.
... Mary resolves her feelings toward Tony (to marry or not).
... Miss Baxter is allowed to stay at the Abbey.
... Sarah Bunting either learns some manners, or Tom finds a more appealing love interest.

How about you?  What did you think of the Season 5 premiere?  What would you like to see happen next?
Birdhouse Books at 10:37 PM 4 comments:
Share
‹
›
Home
View web version